At Cubbies, we believe a teddy bear can brighten the smile of somebody in need in so many ways; as a child’s comforting companion, or as a dedication to the memory of a lost one. So, we think it’s important to reach out, give back and help those in need. For this reason, I wanted to share with you some of the worthwhile projects Cubbies are involved with.

Cubbies are privileged to recently get involved with Operation Orphan. A renowned charitable organisation working to improve the life for orphans and vulnerable children in a holistic, culturally relevant and sustainable way. You can find out more about this wonderful charity by visiting http://www.operation-orphan.org/.

So far, we have donated over 2,000 Cubbies products, which are to be distributed to children in need all over the world. Some will be distributed in Nottinghamshire, United Kingdom, and some are currently making the journey to Sierra Leone, Africa. More destinations include, Barbuda (Caribbean), recently affected by Hurricane Irma, and various countries in Eastern Europe. 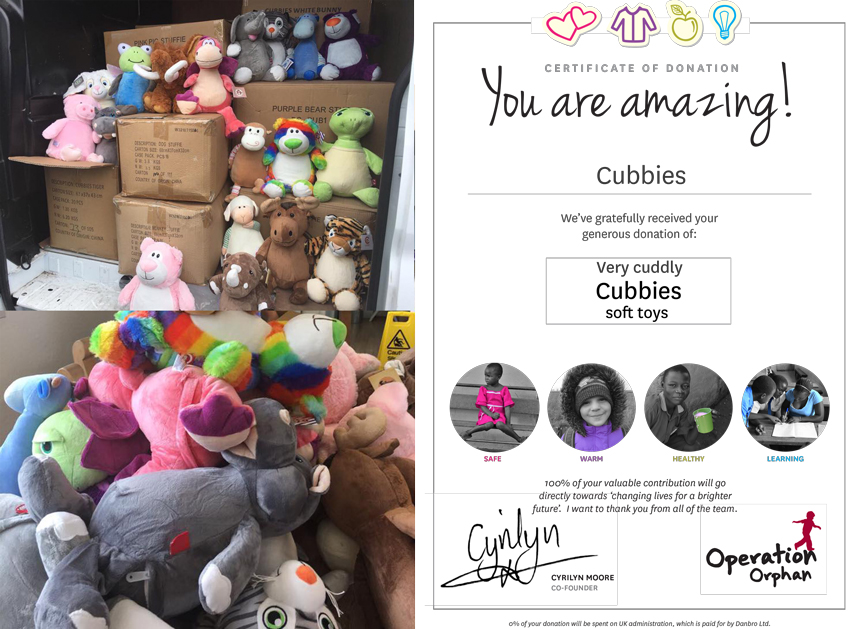 Updates of their whereabouts can be found on the Operation Orphan or Cubbies Facebook pages. This is a truly wonderful cause and we are so excited for these Cubbies to put some smiles on children’s faces!

There is nothing more difficult than losing someone close to your heart. For children, it’s important to remember that although they do not see someone they have lost, they are still watching over them.

We created the Guardian Bear as part of the Cubbies Giving Back program. The aim is for these bears to help someone feel connected to a lost loved one, and for this reason all our Guardian Bears are donated, sold non-for-profit or contribute towards charity.

Since January, Cubbies have given away all of their 1500 Guardian Bears. Eighty-six of which we also fully funded to be personalised especially for those who had lost a loved one. We were overwhelmed with the response and have been working hard ever since to fund a similar venture again. Last month we raised $816.50 in just one day! Money that will be used to restart the program in the fall.

The Guardian Bears will be returning very soon as part of another Cubbies Giving Back program.

Hello, do you think you will ever sell the guardian angel bears for us to be able to buy?

Hi Tina, they should be returning in November. We are still working on the format for them and whether they will be for sale or a giveaway like the last time. We will of course update you all when they are available again.

Hi Tina, they should be returning in November. We are still working on the format for them and whether they will be for sale or a giveaway like the last time. We will of course update you all when they are available again.

Hey when will the Guardian Angel Bear be available again please? Xx

Hi Keeley, we currently have a limited number to buy at full price. All proceeds go towards raising funds for the next giveaway. http://cubbies.co/product/personalised-guardian-angel-teddy-bear-cubbies/

*Mainland Britain. Free shipping in the rest of the UK on orders over £350. Order totals exclude VAT. Mainland Britain includes England, Wales, and Scotland excluding the adjacent islands governed from the mainland.

Have you seen our free marketing resources yet?
View Now
Remember...

We have no minimum order and a turnaround time of JUST 2 days.

This website uses cookies to improve your experience while you navigate through the website. Out of these, the cookies that are categorized as necessary are stored on your browser as they are essential for the working of basic functionalities of the website. We also use third-party cookies that help us analyze and understand how you use this website. These cookies will be stored in your browser only with your consent. You also have the option to opt-out of these cookies. But opting out of some of these cookies may affect your browsing experience.
Necessary Always Enabled
Necessary cookies are absolutely essential for the website to function properly. This category only includes cookies that ensures basic functionalities and security features of the website. These cookies do not store any personal information.
Non-necessary
Any cookies that may not be particularly necessary for the website to function and is used specifically to collect user personal data via analytics, ads, other embedded contents are termed as non-necessary cookies. It is mandatory to procure user consent prior to running these cookies on your website.
SAVE & ACCEPT
wpDiscuz